Friday Double Feature: Hold Your Breath For Election Results, In Denton And London

The new documentary 'Don't Frack With Denton' shows how an environment can make it tough for grassroots -- and how movements grow anyway.
By Lyndsay Knecht | October 27, 2017|3:51 pm
Advertisement

Tomorrow at Movie Tavern’s Denton location, a mini-festival of documentaries put on by Thin Line called Day of the Docs is free with registration. On the schedule at 5 p.m. is the second-ever public screening of Don’t Frack With Denton. The feature-length film by Garrett Graham and Candice Bernd debuted at VideoFest’s DocuFest this month. It’s a character-focused, linear tracing of Frack Free Denton’s evolution that begins with earnest first meetings at the Greenhouse restaurant and concludes with citizens’ arrests for civil disobedience as they blocked trucks in peaceful protest outside Vantage Energy in June of 2015. The group of concerned parents, college students, musicians and others first came together to mobilize voters who ultimately banned gas well drilling in 2014, only to have their victory overturned by the state seven months later.

Graham and Bernd do well to show two very backwards realities of small-town Texas politics that keep environmentalists’ hands tied. The first: do they alienate members of the GOP in addressing global warming and climate change while advocating for clean air and water? Cindy Spoon, who leads Frack Free Denton, is less a strategist and more a self-declared enemy of the oil and gas industry. Her presence in the film is strong. The potential power of her influence, however, is lessened by the energy she expends in getting the rest of the city to catch up with her. Which brings viewers to that second roadblock. Even the term activism is frowned upon by leaders in local government, most of whom seemed to see protesting itself as some kind of radical act that automatically undermined the logic of seeking to improve Denton’s long-running problem of consistently pitiful marks for air and water. Even Adam Briggle, a UNT professor whose book A Field Philosopher’s Guide To Fracking was reviewed by the New York Times, is shown in front of his kids’ marker drawings saying outright that he doesn’t self-identify as an activist, preferring instead to use the term in the title of his book: “field philosopher.”

Don’t Frack With Denton‘s greatest merit is its reveal of this sociocultural chasm, one that hadn’t yet been articulated this fully by any reported story or essay on Denton’s dualities. When a pause hits on election night 2014 at Dan’s Silverleaf after it’s announced that voters have spoken and fracking is banned, we see the disbelief that marks real change. When Spoon prepares first-time protestors for the logistics of a sit-in, we see how much there was to learn, and how eager citizens of Denton were to learn it. 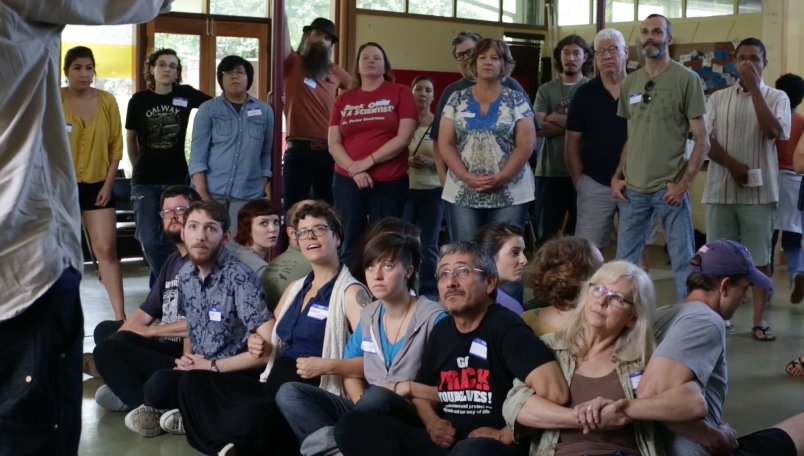 Heavy-handed close-ups of asthma inhalers aside, the film acts as an important primer for groups looking to stand up in places where Republican leaders are leaning on preemption to make sure decisions to increase minimum wage or fight discrimination aren’t left to local jurisdiction.

“We do want to show it to folks in Texas who are still fighting fracking battles,” Bernd says. “We hope to take the film to some of those communities, local indivisible chapters who are beginning to feel some of these tensions and some of these conflicts; students organizing on campus. Fracking is almost a little incidental to the film. That’s what happens here, and that’s our story.”

The very first shot in Don’t Frack With Denton is a march against climate change in Paris, France, a trip the filmmakers undertook on their own dime to show that friends to the environment in Denton had company. Another film that screened at DocuFest in the shorts block called Election Night looks at woes in the United States through an outside lens of empathy. It takes place as returns from the U.S. race for president come in overnight on the televisions in a London pub. More than anything, director Ryan Scafuro’s own cinematography and pacing orient us in our current situation of loss in a country helmed by Trump — less alone in our reality, perhaps, but acquainted again with the world-spanning impact of voters’ decisions and the forces that created them.

Dallas VideoFest has released the schedule for its second leg, AltFiction, Nov. 2-5 at Angelika Mockingbird Station.

Get a front row seat to the best shows, arts, and things to do across North Texas. Never miss a beat.
Dallas Video Festival Videofest