Watching LeeAnne Locken as a motivational speaker has been a little disappointing. Sure, her friends think it’s bass ackwards and fake that she would talk a bunch of trash all day long and then get behind a podium and tell people inspirational things like, “Now, I want everyone to stand. Give yourself an applause. Nothing can stop us unless we let it.”

But personally, I wish she would take it even farther. I wanna see LeeAnne do a motivational speech like David Brent from The Office. Bust out a boombox and let’s get this motivational party started. Play “Simply The Best” and get people to jump around. Or go for something even more powerful and make a badass set of motivational tapes like Kenny Powers.

Point is, plenty of jerks do motivational speeches. It’s not a new idea to be a complete turd in your regular life and then try to get up on stage and pretend you’re someone else. That’s why stages were invented. That’s literally what they’re for.

The real thing I learned from LeeAnne’s motivational speech segment was that when fancy people don’t like your outfit, they say, “How gorgeous do you look?” It’s perfect. It’s a question that counts as a compliment. Thank you for serving that up, Kameron. I’mma use that on my friends. I’ll sound like a stuck up Fancy in no time! See, Haters. This show has real value.

Lean in to what you know, LeeAnne. You’re the meanest motivational bitch ever. Give us all pointers on that. Teach me how to make crazy face at an enemy, LeeAnne. 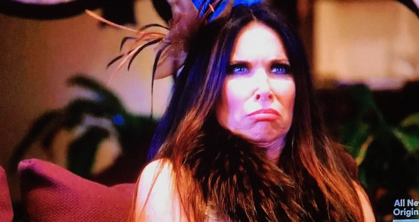 Teach us how to act innocent when we’re clearly at fault. 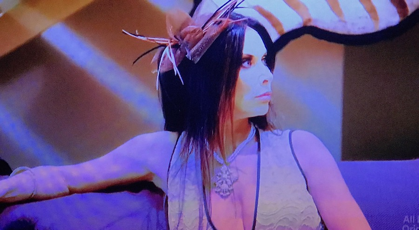 After her speech, D’Andra gives LeeAnne hell and says, “I’m not comfortable with people talking behind each others backs.” She invites LeeAnne to “cut the crap” and come to an HonesTea at her home. She says there will be scones and tea sandwiches.

Cut to Kameron: “I love tea samwiches.” Samwiches. By the end of this, we need a Kameron-to-English dictionary. And I’m not mad about it. 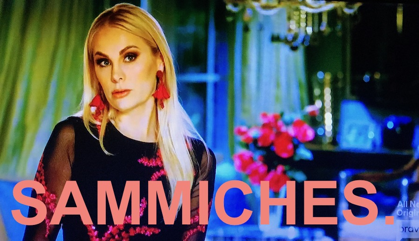 We cut to Cary and Mark Deuber having dinner in their home with Kameron and Court Westcott. Doobs is quietly losing his ever-loving Fendi mind at the table as his 4-year-old daughter acts very 4 years old. Cary and Kameron are talking and drinking over her daughter’s perfectly normal squeals. When Doobs can no longer handle the fact that his daughter currently exists, he says to Cary, “Can you pretend to make an effort?”

Awww DOOOOBS. NO. Not you, too. He fights with Cary until she says “Sometimes, I feel like I’m drowning,” and stomps away through their mansion in her fancy heels. Standing ovation for the Struggle Is Real Housewives moment, Cary. Great job.

And dangit, Doobs. Stop being a wang. I think you’re just mad because someone made you wear a Mr. Rogers sweater without the appropriate two pairs of shoes to change into and out of when friends arrived. 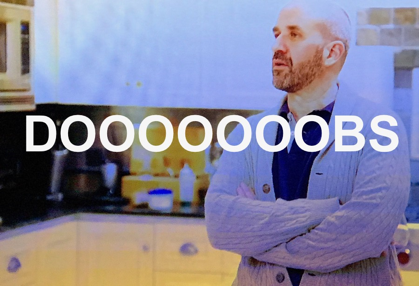 Cut to Rich proposing to LeeAnne. And LeeAnne actually smiling a real smile. And the world breaking in half and the universe shattering and peace and love and destruction boiling all over all of us. 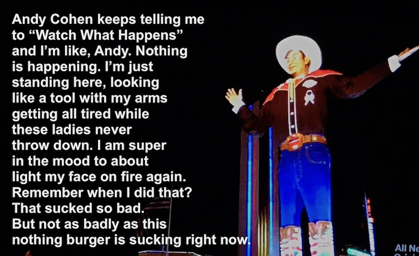 Cut to this HonesTea thing that D’Andra is hosting. It’s a magical set-up, because every viewer and every person involved with the show knows that this can only go terribly. Everyone except D’Andra. She really thinks this will fix everyone’s problems.

I don’t think she read the contract for this show. Why do you think your friend LeeAnne continues to share couches with people she despises? It’s all in a day’s work. And it’s what we’re all here for. There are shows on television about happy families and happy friends and happy ferrets. This is not that show. If you wanna be on Trading Spaces and hug it out, I heard that show is coming back. Yes, with Ty Pennington. Duh. It’s not a show without him and Paige Davis in jeans.

Cut to Kameron talking about the appropriate attire for a tea party, and insisting that you must have your, “you know, your hooters covered.”

Brandi attempts to apologize to Kameron. Kameron nitpicks the apology.

Brandi: I feel like I apologized to you many times.

Kameron: Oh, when was that?

Brandi: When I gave them the fucking gifts.

Kameron: Oh they were effing gifts?

And then Brandi slapped Kameron’s smug look off her face and Kameron ripped Brandi’s weave out and Brandi picked up Kameron’s Birkin and farted in it and Stephanie broke a glass and threatened anyone who came near Brandi with it and just kidding nothing but a commercial break happened and everyone sat back down like ladies. Ugh.

Brandi asks LeeAnne if the plastic surgeon LeeAnne uses is actually just an OBGYN. Except, Brandi doesn’t say “gynecologist.” Instead, she uses the proper medical terminology and says “vagina doctor.”

LeeAnne clarifies that she has had “threading” done to her face by that doctor, who is “board certified,” and that she is going to get a boob job done soon.

Can we pump the brakes and talk about “threading” for a second? I was living in a world where I thought that threading was just a thing they do to your eyebrows instead of waxing them at Valley View Mall. Now, I find out that this is a term for a type of facelift? Y’all, that is going to need a better name right now, before I throw up about it. You need to call that crap “The Rainbow Connection” or “You’re A Totally Bang-able 20-Year-Old Now” or “Sham Wow” or something much more delightful. You can’t call this stuff by the actual procedural process. I don’t wanna picture someone zipping up my face after they’re done stretching it out for me. Get some Creatives on this. Surely a marketing team can help with this terminology.

Cut to LeeAnne finally calling Cary a mean name. I can’t type the word here because of “standards” and “rules,” but it rhymes with “skrunt” and that vagina doctor LeeAnne is seeing for her boob job is actually board certified in it.

So then, Cary calls LeeAnne a carnie banger and LeeAnne takes the gavel D’Andra has been wielding all night and hits Cary in the head with it and they flip a bunch of tables and start tearing at each others’ knee-length dresses and just kidding nothing happens except Cary makes this face:

I’m beginning to wonder if the previews of this show are showing us too much. Are they hyping the only interesting thing that will happen each episode? It’s like I’m watching a preview for Lethal Weapon 15—they’re gonna show me all the car crashes and then Danny Glover is going to say “I’m too old for this shit” and then Mel Gibson is going to look wild-eyed and sad for a second and there’s really no point in watching the movie, because that’s the entire plot, but I’m bored and wine tastes good, so fine. I guess I’ll see you back here next week for a bunch of wind-ups that end with no explosion. Man, if I were dating this show, it would so be over. This isn’t healthy. 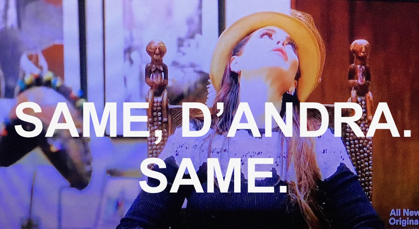 Drinking Game for next week: Every time LeeAnne gossips behind someone’s back in a bunch of babble that makes no sense, drink. Every time someone prays, drink. If Kameron goes a whole episode without mentioning the color pink, chug.