You should see a few familiar locations in the new miniseries starring James Franco.
By Bethany Radcliff | February 9, 2016|9:22 am
Advertisement

You may have heard of the upcoming Hulu miniseries 11.22.63, an adaptation of Stephen King’s 2011 novel premiering on Presidents’ Day, Feb. 15. It would have been hard to miss if you lived or worked anywhere near downtown Dallas during filming in October.

Both King’s novel and the upcoming eight-part show tell the story of Jake Epping, an unassuming high school English teacher from Maine who discovers a time-travel portal in a local diner. This eventually sends Epping, played by James Franco, on a quest back in time to right the world by preventing the assassination of President John F. Kennedy. That’s where Dallas comes in. The show’s connection to Dallas got us thinking about familiar locations and locals you may spot in 11.22.63.

Upon a quick search of the series’ filming locations, we found that six of the seven listed on IMDB are in Canada. (The non-Canadian site is Dealey Plaza). What other places can we expect to see? IMDB isn’t necessarily all knowing. Here are some that could perhaps be featured in the miniseries:

Production at Dealey Plaza stopped traffic big time back in October, but also offered a chance to peek in on the filmmaking process. The site of Kennedy’s assassination, and possibly the famed grassy knoll, should get ample screen time. This is one of the only locations that we are 100 percent sure you will see in the miniseries. As we mentioned back in December, someone compiled a 12-minute-long, modern Zapruder-style video of amateur footage of the October filming.

On Nov. 22, 1963, Kennedy arrived at Love Field via Air Force One. On the same day, after Kennedy’s assassination, Lyndon B. Johnson was sworn in on the presidential plane. Unfortunately, according to the IMDB location list, it seems that any Love Field scenes were shot in Downsview, Ontario, Canada, but we can still hope to see a representation of the airport. We can pretend, just like we will when we see this CGI panorama of the 1963 Dallas skyline.

Though we can’t be sure that a Parkland Hospital scene will appear in the series, there is a “Dr. Jones,” played by Kristian Brunn, listed in the cast. Presumably, this is referring to Dr. Ronald C. Jones, one of the surgeons who operated on Kennedy. We spotted a bloody someone running down the hall of what appears to be a hospital in this trailer. That may confirm a Parkland representation, although filming did not take place at either the hospital’s old or new facilities.

Around the time of Kennedy’s assassination, Oswald’s family was living at 214 W. Neely Street in Oak Cliff. Oswald himself was staying at a room in a house at 1026 N. Beckley Avenue, which you could have purchased in 2013. Oswald had a famous photo (and later Life magazine cover) of his arms-bearing self, taken in the backyard of the Neely home in 1963. In a panel at Sundance Film Festival, series writer Bridget Carpenter mentions that she and the cast were able to visit the Neely Street location in order to re-stage the famous photograph. You can see a quick glimpse of this in the full-length trailer, as Oswald’s wife Marina snaps the shot. A more detailed look can be seen in an interview with James Franco (skip to :36). 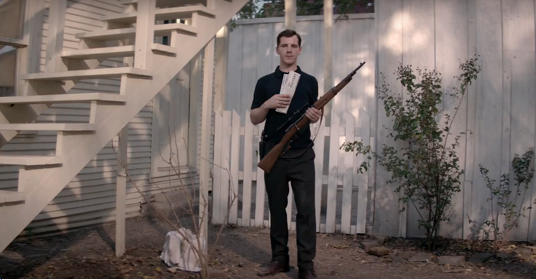 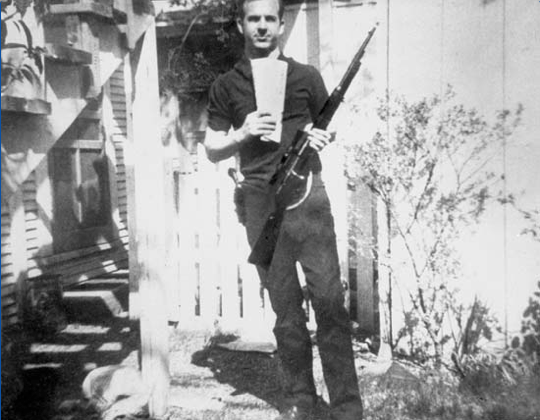 The Ruth Paine Home in Irving

Ruth Paine was a friend of the Oswald family, and Lee reportedly stayed at this home with his wife and children the night before he shot the president. Paine is listed as a character on the cast list, so there is a chance her home may make some sort of appearance in the series. Though Paine has since moved to California, her home is still standing and is now a museum.

In the Sundance Film Festival panel, Carpenter mentions that the Sixth Floor Museum was extremely accommodating, allowing the cast and crew to go up to the location where Oswald presumably stood upon firing the shot(s) that killed Kennedy. Though we can’t be sure if the actual interior of the building will make an appearance in the series, we know the outside will. You can get a pretty nice view of the exterior, along with the Dealey Plaza fountains, in this sneak peek with James Franco.

In addition to those Dallas locations, here are some recognizable faces to look for in 11.22.63:

Christopher Phipps is a Dallas native who remembers coming home from kindergarten and having his cartoons interrupted by coverage of Kennedy’s assassination. Phipps is an actor, and will be portraying the one and only John F. Kennedy in the miniseries.

Australian actor Daniel Webber plays Lee Harvey Oswald, Kennedy’s alleged killer. According to Webber, the series explores Oswald as a person and provides a chance to see his humanity up close and personal. So, we can expect to see a rounded, imaginative characterization, and perhaps a new, unexplored side of Oswald. The series presumably concentrates on the relationship between Oswald and his wife Marina, played by Lucy Fry. Oswald’s mother Marguerite Oswald is also in the cast, played by the Tony Award-winning Cherry Jones.

Jack Ruby was the nightclub owner who shot Oswald to death in the basement of the Dallas police station. Ruby is listed as a character, to be played by Antoni Corone. It will be interesting to see Ruby’s role in the series, considering Epping (Franco’s character) will also be after Oswald. We predict Epping will track down Ruby to gain more information on Oswald’s whereabouts.

Let us know what you think as we prepare to watch 11.22.63. The show premieres on Hulu on Feb. 15. A new episode will be released every week.