If there was a real star at the opening night of the Dallas International Film Festival, we really didn’t know who it was until the program already kicked into gear. That’s when Dallas mayor Mike Rawling strutted out onto the stage of the Magestic theater and stole the show, spouting off a string of filmakers with booming confidence.

“I didn’t see my first film until my senior in high school,” the mayor said, receiving a somewhat muddled (dubious?) response from the audience. “But then I discovered Fellini, Antonioni, and Bergman. I discovered how movies show us the pathos of pain and the absurdity of life itself.”

It was the fluency with which the mayor tackled the topic, unrehearsed and devoid of pandering, that had the audience swooning. This articulate aesthete is our mayor? Perhaps Dallas really is changing. Then, the mayor took another swing:

“Aesthetically we need [film],” Rawlings said. “But film is a business. And we can make money in Texas and in Dallas doing film. And we must lobby in Texas to make sure we can be competitve.”

The Majestic erupted in cheers and applause, as the mayor, whether he intended to or not, put the entire 2012 edition of the Dallas International Film Festival in context. “Film is bigger in Texas,” is the festival’s somewhat platitudinal tagline this year, and by offering top festival honors to some heavyweights on the business side of the motion picture industry, as well as a 25 year anniversary of the biggest movie ever to come out of Dallas, Robocop, Dallas seems to be thinking (yet again) of how it can make more movies. We’ll see if the festival can throw some momentum behind the enthusiasm.

But first, a word of caution. If the short video biography of Cinemark founder Lee Roy Mitchell was produced in Dallas, then the city needs to work on its chops. There was almost a need for subtitles to cut through the corporate-ese of the video which felt like a re-purposed bio for the boardroom. It hung awkwardly in the room and in sharp contrast to the off-beat feel of this year’s Dallas IFF in-house sponsor reel, which preceded the Mitchell video. The promo reel is a clever, quirky thing, dressed in warm yellows and oranges, backing silhouetted landmarks and logos on cartoon airplanes and cars that zip about the screen. It has an easygoing feel that sets a nice tone for the fest. It obviously had a different author than the Mitchell bio.

Mitchell appeared genuine and gratious receiving the Dallas Star Award, though he is no Cicero — or Rawlings. Rolling through thanks, he reminised on how he used to visit the Majestic once a week to negotiate for films when he owned little movie houses in Ennis and Waco. Independent movies, he said, is how he got his start. “We survived those years together,” Mitchell said.

It is hard to get too excited about the CEO of a chain of theaters that helped create the megaplex, especially when there is so much nostalgia for small movie houses, mom and pop picture shows, and art house cinemas. You could make the argument that Cinemark represents the Wal-Mart of movie distribution, running-out the small houses, often anchored in small down towns, and creating a distribution chain that participates in the homogenization of movie entertainment. But in the video, Mitchell makes a key point: Businesses like Cinemark drive the aspirations of film production. They also bring to bear economics of scale that bring screens to areas that may not otherwise support a theater. And with the increased conversion of theaters from film to digital, businesses like Cinemark find themselves intrinsically involved in what is perhaps the most pressing question facing the history of cinema today, film preservation and restoration. Mitchell represents someone who plays an significant role in the movie production ecosystem on international scale, and he is a product of North Texas.

At the end of his remarks, Michell stepped away from the podium, remembered something, and leaned back to the microphone.

“And we will join our mayor in lobbying Austin,” he said, to the expected cheers.

None of the stars of the second film by actor/director Josh Radnor, Liberal Arts, were able to make opening night’s screening, but producer Claude Dal Farra introduced the movie. It ended up fitting with the festival’s producer theme, Dal Farre sharing a story about how the enthusiastic and sincere Radnor pitched the film and the producer responded flattly, “Why do you want to make a feel good movie?”

Liberal Arts is, if nothing else, a feel good movie — sweet, cute, and warm — a romantic comedy best-served to under-35 significant others snuggled under blankets. It is also a vast improvement over Radnor’s debut, Happythankyoumoreplease, in the simple fact that Radnor has grown more comfortable with his comedic instinct, and he tones down his inclination to pick and poke at his character’s psyches with boiled-down psycho-jabber. Radnor plays Jesse, a 35-year-old university admissions counselor living in New York who is called back to his alma mater, a small college in rurual Ohio (the movie was shot on the campus of Kenyon College), for the retirement party of his favorite professor, Peter (Richard Jenkins). There he meets Zibby (Elizabeth Olsen), a pretty sophomore. Jesse and Zibby hit it off during the weekend, and before he returns to New York, Zibby gives him a classical music mix CD and invites him to write her the “old fashioned” way, that is, on paper. Back in New York, the music begins to impact Jesse’s life in whimsical, often hilarious ways, and the couple’s letter correspondence blossoms into a relationship.

What is most appealing about Liberal Arts is its softly nostalgic longing for the sweet simplicity and intellectual leisureliness of collegiate life. We are most affected not through the babbling about books and poets, but in quirky ways Radnor works their influence into mood and feel of the film, overlaying the classical tracks and personifying the unchecked cerbreality in the diametrically opposed personae of two of the movie’s most enjoyable characters, Nat (Zac Efron) and Prof. Judith Fairfield (Allison Janney). Nat is a stoner-ham, animated and spirited, speaking always in jarbled hippie-esse. Judith is a romantics professor whose been worn down by academia, becoming cold, cynical, and detached. We need both these characters in Liberal Arts to prevent Radnor from losing himself in what drowned his first movie, all the bromidic soap-boxing, in which all motivations, self-understandings, aspirations, and philosophies are hemmed-and-hawed, mumbled and jawed, with the same vainly self-conscious satisfaction of sporting a tweed jacket on a gear-less bicycle.

There’s some of that in Liberal Arts. Jenkins character is mostly reduced to kvetching, and, as in Happythankyoumoreplease, Radnor’s Jesse needs some poor soul to inexplicably need him. That’s where John Magaro’s mopey and pointless Dean comes in. But Olsen and Efron remain center stage. Olsen’s Zibby has a wry spunk, a knavish spirit which goes a long way towards making the cutesy, hug-y stuff bearable. And Efron’s natural sincerity is an aseet. His Jesse is accused of being too soft-hearted, and we come to think so much of him, but that’s the point. He’s the kind of guy who frets about age, not mortality; affection, not love. “Everything is going to be okay,” Nat tells Jesse, as if they were a duo washed-up in an AA meeting. And of course it is. There’s not that much at stake, and everyone has a good sense of humor.

Check back daily for reviews of films showing at the Dallas International Film Festival. Here are a few showing today that we reviewed in our preview: 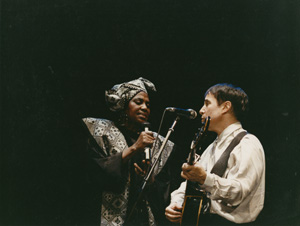 Paul Simon’s Graceland album has become such a ubiquitous part of American musical culture that it is difficult to place it back in the context of its creation. That’s what filmmaker Joe Berlinger tries to do with his documentary, Under African Skies. To shirk Behind the Music convention, Berlinger roots his music doc in the political conflict which played out around Simon’s album. South Africa is suffering Apartheid as Simon makes his way to record with South African musicians in 1985, violating a United Nations cultural boycott. In the movie, Simon sits down with Dali Tambo, a founder of Artists Against Apartheid and a critic of Simon’s work on Graceland, to retell the story from their conflicting perspectives. The result is a recapped version of the tense historical situation alongside studio shots with the Boyoyo Boys, the “discovery” of Ladysmith Black Mumbazo, and some notes on Simon’s completion of the album inNew York.

Ultimately Under African Skies strives to paint Graceland as a celebration of how art can transcend specific political environments, but Berlinger’s movie feels incomplete in that his championing of the artist glosses over some of the controversy surrounding the creation of the art. For example, while the doc touches on some of the controversy over Simon’s songwriting credits – and thus royalty control – on Graceland, much is left omitted. Paul Simon still gets full credit for “You Can Call Me” Al, even though the documentary clearly shows an African guitarist originating the song’s signature riff. And completely missing from the conversation are some of the non-African studio musicians, such as King Crimson’s Adrian Belew and Los Lobos, who have publically quarreled with Simon over songwriting credits. Ignoring all this – and likely more – left Under African Skies feeling enjoyable, but incomplete. — Peter Simek 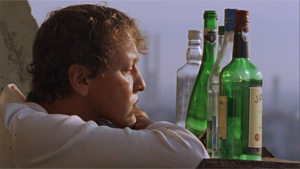 Never has a Communist Bloc country looked so beautiful to me. Director Kristina Nikolova’s long-form debut, Faith Love and Whiskey, tells the story of Neli, a Bulgarian 20-something who falls in love in the United States, then returns to her native Bulgaria. Upon her return, she falls in with her old, alcoholic boyfriend, then has to choose between the decidedly American-sounding Scott and the equally Bulgarian-sounding Val.

Nikolova takes us through the mountains, fields, forests, and streams of Bulgaria, letting the camera linger on a sunrise or pooling water. It makes you cherish youth, but also reel at its violence and foolhardiness. Whiskey is anchored by Ana Stojanovska, who plays Neli. Beautiful and sad, Stojanovska bounces between her character’s two worlds flawlessly, weighing her role in each. In the end, the viewer doesn’t know which world she should choose, but is confident it doesn’t matter: Neli will be fine.

Nikolova crams years of history, backstory, and Eastern European culture into 75 sharp minutes, a feat that does not go unnoticed. This is the debut of a filmmaker that should also not go unnoticed. — Bradford Pearson 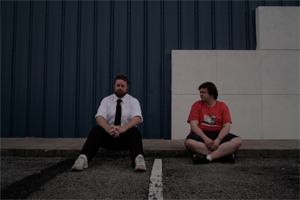 In high school, I worked as a lifeguard at a really ridiculously wealthy country club in New York. Everyone who worked there was middle-class or poor. The lifeguards hung out with the chefs, who hung out with the maintenance guy who lived in the golf shed, who eventually died of a drug overdose. We were one big, reasonably happy family.

Watching Cinema Six, I was transported back to Millbrook Golf and Tennis Club, where people worked because they had to. The film is set in a family-run movie theater, the kind of place that still sells pickles in bags and the ticket-rippers let their friends in for free. The leads — Mason, Dennis, and Gabe — couldn’t be more different, less their hatred of Stanton Family Cinemas. The movie examines their day-in, day-out lives in anAdventureland kind of way, a realization I made even before an apropos cameo. It’s quick, fun filmmaking at its finest, with the movie wrapping up enough plots and leaving enough loose ends to make it believable. It feels like a deeply personal film, but one that can be appreciated by anyone who’s held a job just for the money. Cinema Six also reaches Departed levels of vulgarity and profanity, complete with defecation. In other words: it’s pretty close to perfect. — Bradford Pearson