Last week on Style Network's Big Rich Texas, viewers were left with an uneasy feeling when Melissa was super-cryptic about her pageant history, revealing only that she was Miss Carrollton and Miss Dallas but refusing to provide even the most basic information about her reign.
By Merritt Patterson | March 12, 2012|2:45 pm
Advertisement

Last week on Style Network’s Big Rich Texas, viewers were left with an uneasy feeling when Melissa was super-cryptic about her pageant history, revealing only that she was Miss Carrollton and Miss Dallas but refusing to provide even the most basic information about her reign.

Luckily for viewers, I’m not just a writer; I’m also Nancy Drew.  Shortly before this week’s episode aired, I received the not-so-easy-to-get package I’ve been waiting for all week. And as soon as I’ve wasted more precious time reviewing the DVDs pictured below, I’ll be reporting back. 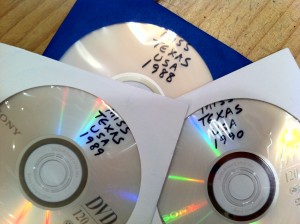 But first, the tragic drama that is episode 4.

We’re hanging out with Bonnie and Jason, they’re reminiscing about their wedding 18 years ago. It probably would have been a sweet moment to watch had we not been left wondering why Jason’s face was blurred in one photo but not another. The places my mind goes while pondering the reason must be far worse than the actual photo.

Bon, if you’re reading this, please send an unedited copy of that pic so I can free myself up to fully focus on Whitney’s outrageous, age inappropriate behavior.

Whit has been banned from the club for 30 days due to her drink throwing, curse word chunkin’, hands around Kalyn’s neck breakdown at Leslie’s pageant last week. Surely Whitney realizes that she’s getting off easy since for some inexplicable reason no one called the police. Let’s check in with her and see how relieved she is.

Just as Whit enters the room, Bon and Jason point out a photo of Whitney at their ceremony when she was 5 years old.

Jason: That’s when she was sweet and innocent, before the demon came out.

Whitney: [As she pours some liquor] I’m still sweet and innocent.

Bonnie and Jason remind Whit that their vow renewal ceremony is being held at the club and since she’s been banned, she’ll need to do some apologizing to Mr. Scoma as well as other members who were there.

Whitney: I didn’t do anything. It’s not my fault ya’ll picked the country club.

Jason: It’s not my fault you went and got kicked out of the country club. Just apologize.

Whitney: F*** that. Kalyn started it.

Jason: You’re being selfish, you’re being rude to your mom. I’m not putting up with it anymore.

Then she flashes a double birdie, which has been blurred because I’m sure people who have tuned in to this show would be really offended by that. 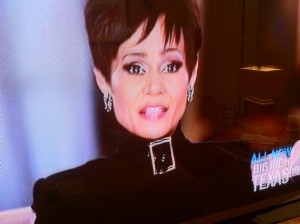 Next, we’re at Connie’s used couture shop, Uptown Consignment. Leslie drops by because, “None of the women at the country club will talk to me right now.” Les asks Connie why she hasn’t been defending her.

Connie: If she wants the truth, I’m gonna give it to her.

Great idea Connie, we’ll do the same for you. That buckle on your neck must go.

Leslie: You introduced me to the country club. It’s the best, it’s the best. You have to impress.

Connie: Didn’t you think any of this would catch up with you?

Leslie: You’re right, I made a mistake. My big mistake was not correcting the embellishments right on the spot. I let people think I had $100 million.

Leslie, sweetheart, whether or not you have $100 million is only an embellishment if you really have 99.5. And how would people be under the impression that’s how much money you have? If you told them that you have $100 million, this would be what Texans call a lie. The good news is you don’t appear to be alone, it seems other cast members have been embellishing too.

Leslie cries, Connie comforts. And at least one Woodhaven friendship is on the mend.

Pam meets Heidi Dillon at Prashe Design Space thinking she’s getting an invite to be on the board of the Fashionistas. Instead Dillon asks her to audition for the part by co-chairing a fundraiser.

Pam: I thought Heidi invited me down here to talk about being a board member, not to plan a party.

Yeah Pam, it’s a shame the behavior you’ve shown to date doesn’t speak for you, looks like you’ll have to work for it.

And I see what you mean about being invited “down here.” Had you not been required to take a road trip from Plano to Dallas for this disappointing meeting, you might not be so grumpy.

Pam: I’m not sure she realizes who I am and just how much I do have to offer.

Totally with you on this, Pam. Who DOES Heidi think you are? It’s like she thinks you’re an f-bomb dropping, social climbing resident of Collin County who is a member of a barbed wire encased Fort Worth country club. Or something like that.

Over at Woodhaven, DeAynni’s husband is building a gazebo and apparently it’s Leslie’s fault.

Pam: Since Leslie and her phantom millions didn’t get us a new wing at the country club, we’re stuck with this dumb gazebo.

Leslie is the only one at the club who was thought to have money for additions to the building? And since she didn’t fund the expansion, Plan B was a gazebo?

Bonnie comes out to check on construction and reveals some details about her wedding, “It’s going to be a corpse bride theme.”

Since Whitney won’t apologize, Bonnie tries to bribe Mr. Scoma with candy. He probably thinks he’s on a hidden camera episode of Dateline so he doesn’t take the bait. Instead, he throws Leslie under the bus, “She wanted to know if we were going to restrict privileges for Whitney.”

Bonnie: I can’t believe that b**** Leslie is the reason why Whitney got kicked out of the club.

Bon, I can see where Whit gets this awful tendency to blame everyone else. Need I remind you that your daughter threw a drink in Kalyn’s face and then proceeded to strangle her? I’m pretty sure that’s frowned upon at most clubs and has nothing to with Leslie.

And Scoma, you’re such a putz. What kind of club owner tells that kind of thing?

Now that Connie and Leslie are friends again, they bond over some cosmetic procedures at Skintastic where Whitney works. They’re the customers but that doesn’t stop Whit from taking a swipe, “Are you here for Kalyn, she needs lipo.” And since Les didn’t jump her, Whit ups the ante, “She’s a chunky monkey.”

After being verbally abused by the staff, they decide to stay. While waiting, Connie mentions that Whitney was kicked out of the club because of the pageant scene last week. Leslie had no idea that Whitney had been banned and feels sad for Bonnie who won’t have her daughter at the corpse bride wedding. 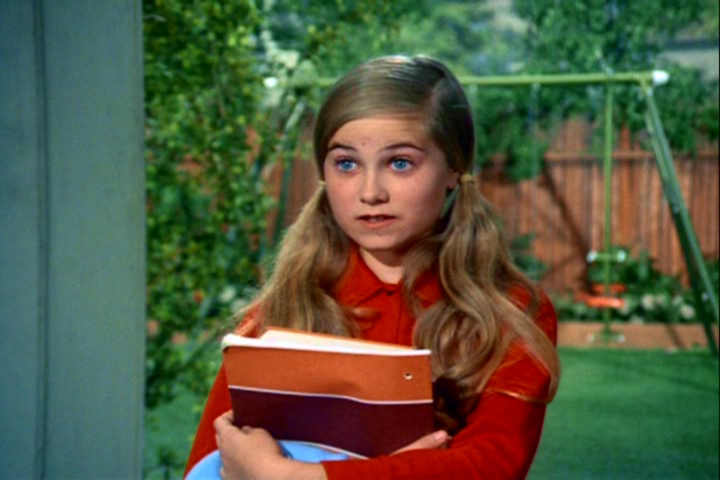 So Leslie morphs into Marcia Brady and despite having been treated poorly by Bon and Whit, she begins to strategize how she can save the day for her mortal enemies. Then she dances in a field of rainbows and unicorns.

Given the theme, Bonnie could probably have picked out a gown at Party City but instead she meets Connie at Demerara to have one custom made. She’s measured and interviewed about the wedding dress of her dreams- fitted and black. The sales girls, perhaps identical twins, act like that’s normal and they agree to get started.

Kalyn has been invited by Melissa and Maddie to go horseback riding for the day. Pam is there too. Kalyn starts spilling her guts about how overwhelmed she is with school, pageant, work and helping with the Lelsie’s biz.

Pam: It feels to me like she’s using you for her business, Kalyn.

Pam, it feels to me like you want Kalyn to be a tool in your next evil plot against Leslie.

Kalyn falls under Pam’s spell and believes she’s being used. Never mind that Kalyn is living a life that only last year from her trailer park in California seemed unattainable.

Back at the club, Bonnie pays a visit to the gazebo where her ceremony is to be held.

Bon: There’s a mud pit where the gazebo should be. My wedding is in 4 days.

Bonnie, to be fair, it’s a corpse bride wedding. And it’s not a wedding, you’re already married.

But Connie is planning the event and sees that a change of venue will be necessary. So she moves the wedding to a banquet room under construction. Bon is clearly distressed.

Bon: Everything is going so wrong, Whitney not being able to come here, my friend’s dog is dying so that’s one bridesmaid out. No, that’s two bridesmaids out.

I think she meant Whitney, not the dog. But I’m unsure.

Marsha Leslie shows up at Skintastic asking for 5 minutes of Whit’s time. But Whitney still seems to think all the trouble she’s in is Leslie’s fault.

Leslie tells Whit that she never made Tyler date her. Then Les gets a little carried away and tells Whitney that she takes responsibility for what went wrong at the club and that if Whit will apologize to Scoma, she’ll also be there to tell him that it was, “everybody’s fault, not just yours.”

All this because Leslie wants Bonnie to be happy. It would bring a tear to my eye if it weren’t so freaking ridiculous.

Hannah meets up with Whitney at Sfuzzi. Hannah tells her she came in town for her mom’s Fashionistas event.

Whit: What the Hell is that?

Hannah: It’s like an organization…like men and women who love fashion and champagne and…basically they just drink a lot of champagne.

Whitney tells Hannah all about the drink throwing, strangling incident at the club last week, “Leslie tells Scoma that I started it and got me kicked out.”

Whitney, you did start it.

Wait. Shut up. Hannah is talking like a grown-up and encouraging Whit to apologize. But Whitney has principles and says she doesn’t apologize if she’s not sorry. Hannah throws down the wisdom, “You have to swallow your pride.”

And with that, viewers around the world jump to their feet and applaud Hannah.

Pam’s event goes smoothly despite the fact that she hit the dance floor and got her groove on in front of people. She’s voted in as a board member and I’m sure the Fashionistas will get around to reflecting Pam’s position on their website any day now.

The wedding is about to begin when Whitney shows up. Thankfully it’s a corpse bride theme so she didn’t have to buy a new outfit. Amidst the males wearing eyeliner, the sleeveless, tat covered minister and the smoke pouring out of a machine, Leslie and Bonnie make up- at least temporarily.