Enjoy unlimited access to all of our incredible journalism, in print and digital.
Subscribe Now
Advertisement
B-

Enter The Void Is A Daring and Ambitious Film, Difficult To Watch, But Harder to Accept

Gasper Noé is one of the most inventive, ambitious, and challenging filmmakers working today. In Enter the Void, he constructs a parable about death — one that, like his characters, can’t move beyond a terrifying vision of life’s meaninglessness.
By Peter Simek | November 29, 2010|4:44 pm
Advertisement

There’s a moment near the end of Gasper Noé’s reckless, engaging, nauseating, pornographic, indulgent, and ultimately fascinating film, Enter the Void, when the character Linda (Paz de la Huerta) yells out through her tears: “Evil! You are all evil!” Though immediately directed at the circle of manipulators and torturers that surround and infiltrate her life, Linda’s chastisement seems to extend to the entirety of her world.

As in his last feature film, Irreversible, Noé infuses his underworld environments with drugs and sex, pimps and dealers. Enter the Void is a labyrinthine nightmare, the camera twisting and turning past visions of misfortune, despair, and suffering. Noé has called his film a “psychedelic melodrama,” and while that goes some ways in describing the style of the film, it doesn’t nearly begin to capture a sense of the terrifying vision of humanity Noé sets forth for us in this bad trip. Employing his trademark style — unrelenting strobe effects mixed with a manipulation of time and narrative perspective that reveals and conceals information to imply a conspiring of fates — Noé thrusts us into it headfirst. 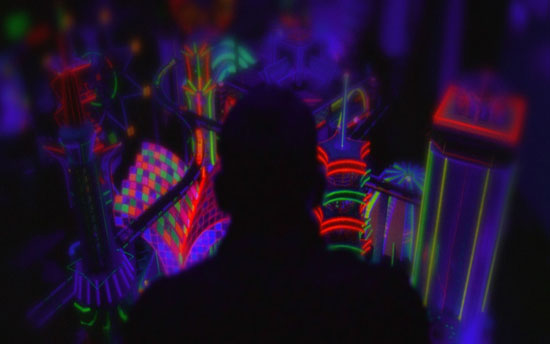 We begin Enter the Void with one of its conclusions, the death of its main protagonist, the young American Oscar (Nathaniel Brown), who is shot dead in a grimy bathroom stall by Japanese police minutes into the film. Up until this point, the film has been shot from a relentless first-person perspective — the camera’s lens watching through Oscar’s eyes —which limits the information we, the audience, can take in, while personalizing the experience of Oscar’s world. When Oscar takes drugs, it is like we are taking drugs. When he trips out, we see the colors and swirling patterns. When he walks through the chaotic section of Tokyo in which he lives, uses the restroom, and is eventually shot, we are, in effect, experiencing it all with him.

Finally, when Oscar falls and takes his last breath on the bathroom floor, the camera lifts away from the body and we look down on Oscar’s dead body. For the rest of the film the camera takes this view – the spirit of the departed boy – and we see the world like the angels in Wim Wenders’ Wings of Desire, mixing voyeuristic observations with flashbacks and fantasies. 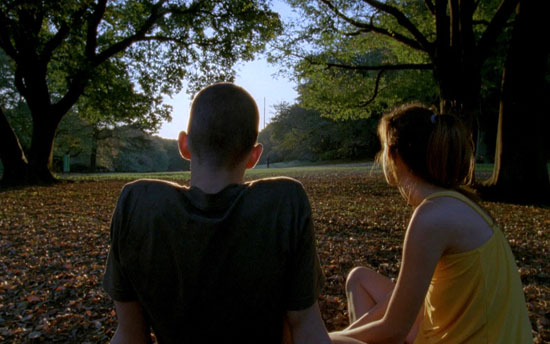 With a floating camera that moves seamlessly through space and time, reality and fantasy, we learn both Oscar’s back story and the consequences of his death-like flashes in a dream. Oscar and his sister, Linda, enjoyed a normal, loving childhood until a car accident killed their parents. Never one to let brutality go un-dramatized, Noé returns us over and over (and over) to this scene of the two parents, crushed and bleeding, while the child Linda screams uncontrollably in the back seat. It is a terrible thing to watch. Foster care then splits up the kids, and they become susceptible to all the things that corrupt troubled youth, namely drugs and sex. Oscar moves to Tokyo and eventually raises enough money by selling drugs to fly over Linda, who quickly becomes a sex worker.

The two orphans reunite in a city that looks like a neon-lit version of one of Dante’s circles of hell. It is a place where people feed and are fed upon. Oscar dodges sexually deviant dealers who try to drug him into becoming a sex slave. He has an affair with his English friend’s mother, who tries to comfort and mother Oscar through sex. Linda becomes the concubine of the strip club owner and turns tricks in her dressing room.

The end of Noé’s film is fit more for the Lido Adult Theater off I-35 than the multiplex, and presumably, that is why Dallas’ major independent film theaters, like the Angelika and Landmark, passed on the opportunity to show Noé’s movie. But the intrepid young filmmakers behind the re-imagined Texas Theatre in Oak Cliff have secured the film for a four night engagement. It is an encouraging sign that Dallas may finally have the kind of fearless repertory independent movie house (along the lines of Austin’s Alamo or New York’s Film Forum) that it has lacked for so long. Enter the Void is sexually and violently pornographic, but it also represents a compelling and masterfully articulated artistic vision that demands to be wrestled with. 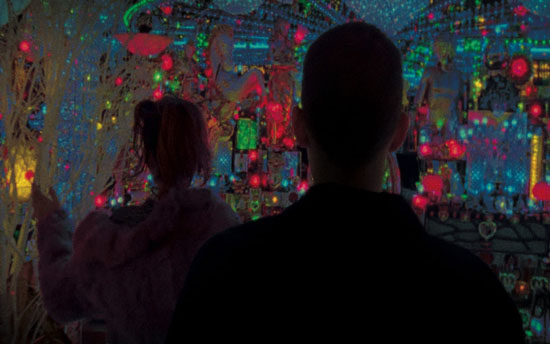 Noé’s power rests in his ability to control our sense of fate and human action by manipulating time in his films, pressing his characters into pressure cooker settings that make the terrifying outcomes of their lives appear as needless, yet, inevitable resolutions. In Enter the Void, his entire cast appears to be degrading rapidly towards his final vision, this strange sexual apocalypse in the hotel in which justice is curiously divvied out: the English friend who sold out Oscar to the police is forced to perform an act on the perverse drug dealer in an elevator while Linda and Oscar’s friend Alex (Cyril Roy), the only two redeemable characters in this bunch, are engaged together.

Throughout the film, Noé is concerned about the nature and meaning of death, and yet his inquiry is limited to the things that confine and define the underworld in which he makes his exploration. The camera, posing as Oscar’s ghost, continually looks for voids to enter, to use as portals into some other world to escape the visions of reality. The camera zooms into light bulbs, toilet bowls, belly buttons, fertilized embryos, and aborted fetuses, seeking to transgress or transcend into something else (it is so overt a metaphoric effect that it at first becomes redundant and then comical). But all the camera/Oscar ever finds is more of the same: more suffering, more self-inflicted torture, more misery, pain, and more meaningless. In this way, Enter the Void is atheistic parable about the afterlife, the story of soul’s endless wanderings through a hell on earth, whose only possible destination is a vision of the endless orgiastic copulation that perpetuates the existence of mankind.

Enter the Void is a revolting film, but it is not its raw brutality and sexuality that prove the must upsetting, but rather its effective construction of a world so completely devoid of human joy. There are flashes of affection between the love-lost brother and sister, though even this relationship teeters on the incestual. Like Linda, the film ultimately condemns all things to their banality, without allowing for the slightest breath of hope. In this way, the filmmaker’s vision is sublimely nihilistic, and it lingers, even after we wake from this dream, leave the theater, and re-enter the real world.

All images courtesy of IFC Films.

Get a front row seat to the best shows, arts, and things to do across North Texas. Never miss a beat.
Advertisement